Eleanor Mannikka has an extraordinary story to tell. In Hidden Valley, Hidden Mind, her finely-written tale about her personal encounters with UFOs and associated psychic experience, she links her understanding of UFO phenomena to the tantric Buddhist teachings that describe the realization of the mind’s true nature at the time of death, and the sacred and hidden realm of Shambhala. Eleanor is an accomplished scholar and has been a student of Khenpo Karthar Rinpoche and a member of KTD since 1978. She founded the Indiana County KTC and cofounded the Ann Arbor KTC. In a recent interview with the author, she talked about her life and work.

1) Will you introduce yourself and talk a bit about your background?

Born in Detroit of Finnish-American parents, I moved to Venezuela as an adult for a total of just under 10 years. I have a Master’s degree in Chinese and a Ph.D. in ancient Cambodian architecture. Once my research on Cambodia’s Angkor Wat became public, it led to interviews on three or four television programs that are intermittently still shown. I am overjoyed that my discoveries are spread far and wide – that is rare for any researcher. One of these discoveries can be seen prominently on the Internet today (in pictures of the sun coming up over the central tower of Ankgor Wat). Many other aspects of Angkor Wat that first appeared to the world at large in my book are also spread across the Internet, most often without my name attached. As a part of my research, I had to become fluent in French and I learned to converse (minimally) in Khmer. I learned to take professional photographs and to draw precise plans and diagrams that explained Angkor Wat. In the meantime, I was raising two daughters, teaching, working as an art slide curator, and running a Tibetan Buddhist meditation center. Sleep was never much of an option. 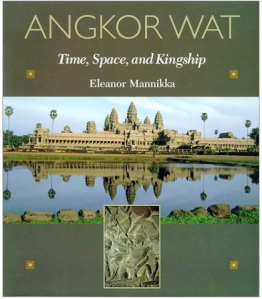 2) What inspired you to write the book Angkor Wat: Time, Space and Kingship.

I went into that research as an act of desperation. While on my way to a Master’s and then a Ph.D. degree in Chinese archaeology or painting, a class I took on SE Asian art demanded a brief paper of ORIGINAL research. I had no Sanskrit and what was that professor thinking anyway? At my wit’s end, I decided to check out a folio with 113 plans and drawings of Angkor Wat, the world’s largest temple. The professor said we knew next to nothing about it after 75 years of research and I was appalled. How awful! Well – I quickly discovered the temple’s measurements were unbelievably precise. From there, I eventually figured out the original unit of measure used to build Angkor Wat. And then an explosion happened: one immediate revelation after another showed that the temple was built on a system of solar, lunar, and cosmic time expressed in numbers like 354.36 (lunar year), 365.24 (solar year), 29.53 (lunar month), and much larger and smaller time cycles. I went into shock and so did everyone else. From that point on, the book was a foregone conclusion.

3) Please talk a little bit about your second book, Hidden Valley, Hidden Mind. What would you like readers to take away from it?

Tibetan Buddhism was not a footnote to my professional career. It is at the very heart of who I was then and now. Why? I had kept the answer secret for decades from all but a very few people. In 1955, I had an astounding encounter with a UFO that went far beyond a simple sighting. Before I could think, I was begging the UFO “people” to teach me what they knew. My heroes were mental giants like Einstein. These UFOnauts would certainly be like that, I thought. Well, I did receive teachings that transformed me and shot down the “reality” accepted by everyone. They were not of physics or math. They were a huge mystery until I met the Tibetan abbot who explained their meanings. Since he told me to keep quiet about all this, I did – until a few years ago when I became convinced that my story would help many, many people. What should anyone take away from the book? Not the UFO encounter, not even the reason why at least some UFOs have a connection with Tibetan Buddhism, only the experience of death and dying. If people remember that it will help them when their life comes to an end. It is the most beneficial practical lesson in the entire book. The rest is an exciting journey through pathways in the mind that everyone has but that generally lie unrecognized – maybe also worth remembering. The book can be acquired at Lulu.com or at Amazon or Barnes and Noble.

4) Do you have any book projects planned for the future?

Yes, because of my experiences going into death and back after the UFO encounter, my current book project is on the process of death and dying, illustrated with drawings and graphics.