A monlam was recently held in Bodhgaya in honor of the 9th anniversary of the passing of H.H. Khenchen Jigme Phuntsog.

At the age of two, he was recognized as a incarnation of the Terton Sogyal, Lerab Lingpa and is cited as being the most influential Lama of the Nyingma tradition in contemporary Tibet. He played an important role in revitalizing the teaching of Tibetan Buddhism following the liberalization of religious practice in Tibet in 1980 and is well-known for having established the Serthar Buddhist Institute in 1980 near the town of Serthar in Sichuan Province. Despite its remote location, the Institute grew from a handful of disciples gathering in Khenpo’s home to be one of the largest and most influential centers for the study of Tibetan Buddhism in the world, numbering to nearly 10,000 monks, nuns, and lay disciples by the year 2000. 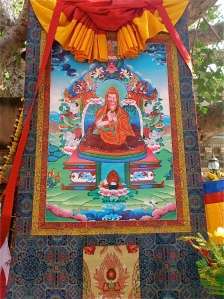 Khenpo Jigme Phuntsog was also an extraordinary Terton (Buddhist treasure revealer), uncovering many treasures texts in Tibet, as well as other parts of China, and India. In the 1990s, he began an appeal to traditional Tibetan yak herders to refrain from commercial sale of their livestock for spiritual and cultural reasons that has grown into the Anti-Slaughter Movement.

Around 1999 the Sichuan United Work Front pressed him on the issue of his support for the Dalai Lama, and demanded that he reduce the number of students at the Institute (either to 150 or to 1400, depending on reports). Jigme Phuntsog refused. In summer of 2001 several thousand members of the People’s Armed Police and the Public Security Bureau descended on the site, razing its structures and dispersed its students.

Khenpo Jigme Phuntsog died of heart failure in 2004, at the age of 70 in Tibet. (These biographical notes are taken from Wikipedia. For more info go here.)