To prepare for the Monlam, sixty-five nuns and monks from Kagyu monasteries gathered at Thrangu Rinpoche’s Vajra Vidya Institute in Sarnath for twenty-two days during December. They spent this time intensely studying the ancient art of torma making —the tall, sculpted images that adorn the main shrine from year to year. At Vajra Vidya, classes began at eight in the morning and continued to six in the evening, and some of the students worked late into the night. Experienced teachers came as well as a statue maker from Bhutan, who gave the students the precise measurements for the figures—the rounding of the shoulders, the bend of an extended leg, the shape of the fingers in their mudras. Thangka painters also use geometric diagrams as a basis for their work, but the tormas are more difficult to create since they are three-dimensional. 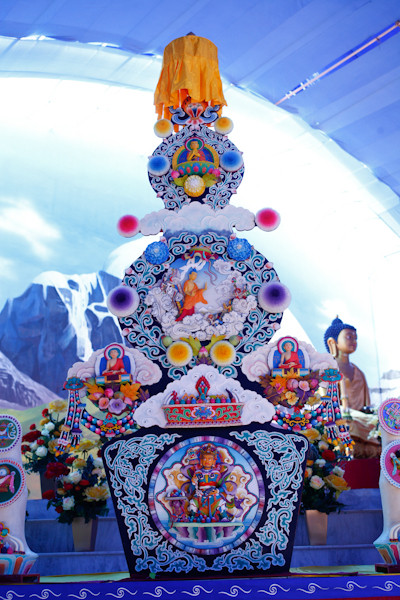