The Four Major Tormas for the 31st Kagyu Monlam 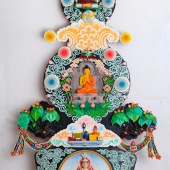 By the 8th of December, sixty torma makers have arrived in Bodhgaya from over thirteen monasteries in India and Nepal. They will work until December 20th to make all the tormas (sculpted offerings) needed for the Monlam this year. Five of them are master artists who have been coming for years. Another twenty are making the simpler tormas and decorations of fruits and flowers, while the remaining thirty-five have come to apprentice. In the future, they will be able to assist at the Monlam and, returning to their monasteries, they will share with thousands this beautiful tradition that the Karmapa has revived and inspired into a newly refined and expressive art form. (photos by Filip Wolak)

← Slideshow and report on the tormas of the 30th Kagyu Monlam — at kagyumonlam.org
Large shalzes created for the Grand Puja of the Thirteen Mandalas of Marpa’s Tradition →