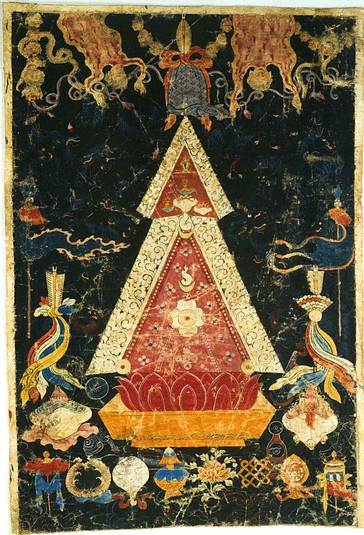 Torma (Tibetan: tor ma. Sanskrit: ba lim ta): torma are cone shaped ritual food offerings sculpted in a variety of shapes and sizes, coloured and then adorned with flat circular ‘buttons’ made from butter.Red coloured torma, triangular in shape, are offered to fearsome protector deities such as Mahakala and Shri Devi. Torma are made from barley flour and constructed for several reasons. They are made as special offerings for specific deities on special days. They are sometimes used to represent the subject of an initiation ritual. They are also used as weapons during repulsion rituals such as turning back obstacles during New Years celebrations. They are sometimes depicted in paintings meant to hang in the temples of the wrathful protector deities.Jeff Watt 5-2005